CD74HCT373
ACTIVE
This product has been released to the market and is available for purchase. For some products, newer alternatives may be available.
High Speed CMOS Logic Octal Transparent Latches with 3-State Outputs 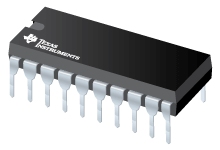