LP5569
ACTIVE
This product has been released to the market and is available for purchase. For some products, newer alternatives may be available.
Nine-channel I2C RGB LED driver with engine control and charge pump 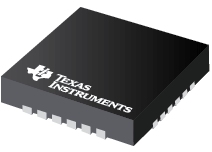