TMS320C6415T
ACTIVE
This product has been released to the market and is available for purchase. For some products, newer alternatives may be available.
Fixed-Point Digital Signal Processor 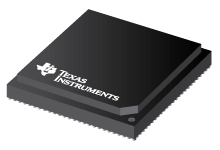 No design support from TI available

This product does not have ongoing design support from TI for new projects, such as new content or software updates. If available, you will find relevant collateral, software and tools in the product folder. You can also search for archived information in the TI E2ETM support forums.