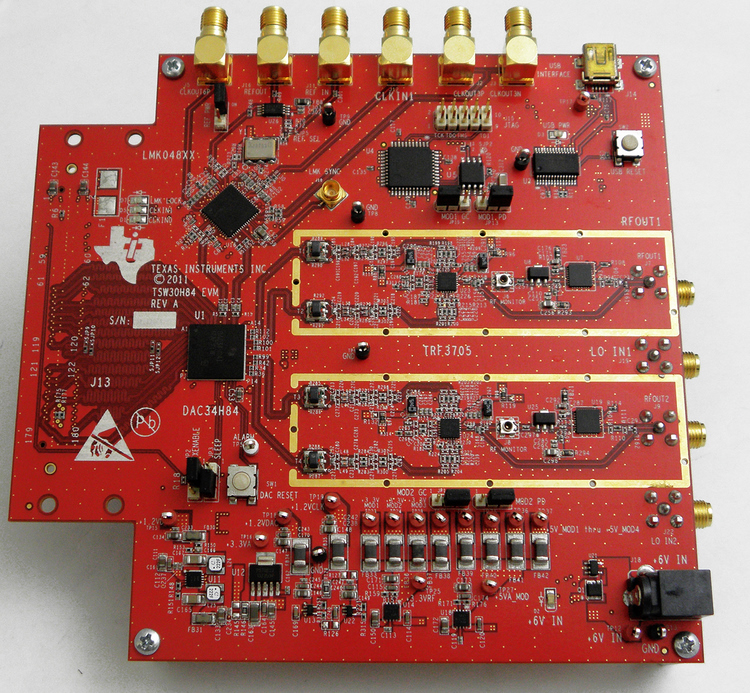 The TSW30SH84EVM Evaluation Module is a circuit board that allows system designers to evaluate the combined performance of Texas Instruments' transmit signal chain with the LMK04800 low noise clock generator/jitter cleaner. For ease of use as a complete RF transmit solution the TSW30SH84EVM includes the LMK04800 for clocking the DAC34SH84 digital-to-analog converter (DAC), as well as two TRF3705 for up-converting the I/Q outputs from the 4-channel DAC to RF carriers.

The TRF3705 is a high performance complex RF modulator with a 300 MHz to 4 GHz output range.

The LMK04800 is a low noise clock generator and jitter cleaner capable of jitter below 150fs rms and output frequencies up to 1500MHz for clocking the DAC34SH84 at its full rate.

The EVM can be used along with the TSW1400/TSW1406/TSW3100 pattern generator to perform a wide range of test procedures. The TSW1400 generates the test patterns which are fed to the DAC34SH84 through an LVDS port capable of running up to 1.5 GSPS. The TSW3100 can be used for patterns up to 1.25 GSPS and the TSW1406 for low cost, simple patterns up to 1 GSPS. Besides providing a high-quality, low jitter DAC sampling clock to the DAC34SH84, the LMK04800 also provides FPGA clocks to the TSW1400/TSW1406/TSW3100 as an FPGA reference clock. The transmit RF signal path also includes an amplifier and programmable attenuator.