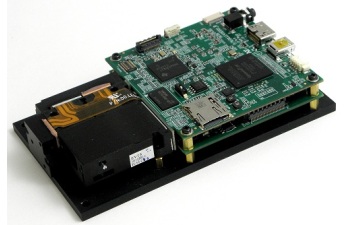 DLP LightCrafter Firmware and Software Bundle: This bundle contains a mixture of software associated with the DLP LightCrafter EVM. It includes the DM365, FPGA, MSP430, and EDID object code loaded onto the EVM, as well as the MSP430 source code. In addition, this software bundle includes the PC-based Graphical User Interface (GUI) for easy communication with DLP LightCrafter and an sample code for using the USB-based DLP LightCrafter API. There are several versions of this software available, and users should take care to ensure that software or firmware from different releases are not interchanged. Release versions 2.0 and 1.1 are compatible with DLP LightCrafter modules that have a “Version 2.0” sticker indicating newer hardware with improved USB connectivity. Release version 1.0 is intended for use with Version 1.0 modules (no sticker).

DLP LightCrafter DM365 DVSDK: The Linux™ Digital Video Software Development Kit (DVSDK) for TMS320DM365 has been modified for use with DLP® LightCrafter™ Development Module. This release supports only Ubuntu 10.04 LTS 32-bit as the development host.

The DLP LightCrafter includes an RGB LED light engine developed and manufactured by Young Optics International. Designed specifically for the DLP3000 DMD, this light engine produces bright, wide aspect ratio patterns well-suited for use in a variety of ambient light environments. For applications where even higher brightness is required, active cooling and thermal management systems can be added to enable light out in excess of 50 lumens.