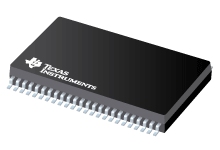 A Dynamic Output Control (DOC) circuit is implemented, which, during the transition, initially lowers the output impedance to effectively drive the load and, subsequently, raises the impedance to reduce noise. Figure 1 shows typical VOL vs IOL and VOH vs IOH curves to illustrate the output impedance and drive capability of the circuit. At the beginning of the signal transition, the DOC circuit provides a maximum dynamic drive that is equivalent to a high-drive standard-output device. For more information, refer to the TI application reports, AVC Logic Family Technology and Applications, literature number SCEA006, and Dynamic Output Control (DOCTM ) Circuitry Technology and Applications, literature number SCEA009.

The 22 flip-flops of the SN74AVC16722 are edge-triggered D-type flip-flops with clock-enable (CLKEN\) input. On the positive transition of the clock (CLK) input, the device stores data into the flip-flops if CLKEN\ is low. If CLKEN\ is high, no data is stored.