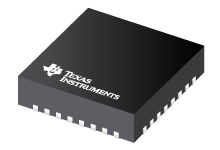 The TLV320AIC32 is a low-power stereo-audio codec with a stereo headphone amplifier, as well as multiple inputs and outputs, programmable in single-ended or fully-differential configurations. Extensive register-based power control is included, enabling stereo 48-kHz DAC playback as low as 14 mW from a 3.3-V analog supply, making it ideal for portable, battery-powered audio and telephony applications.

The serial control bus supports the I2C protocol, while the serial-audio data bus is programmable for I2S, left/right justified, DSP, or TDM modes. A highly programmable PLL is included for flexible clock generation and support for all standard audio rates from a wide range of available MCLKs, varying from 512 kHz to 50 MHz, with special attention paid to the most popular cases of 12 MHz, 13 MHz, 16 MHz, 19.2 MHz, and 19.68 MHz system clocks.