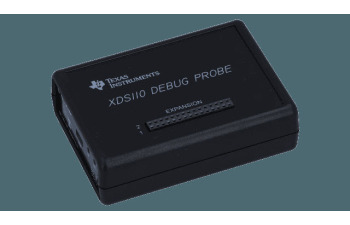 The XDS110 replaces the XDS100 technology and is the first debug probe that supports all TI devices with JTAG, cJTAG and SWD/SWO debug port in a single product. Also, both Core Processor and System Trace are available for all ARM and DSP devices that support Embedded Trace Buffer (ETB).

The XDS110 is also the first of the XDS family of debug probes to feature EnergyTrace for MSP432 and its add-on module EnergyTrace HDR (to be available in the future) for wireless connectivity devices. EnergyTrace is a technology that allows measuring the true Energy and Power consumption of the target board and it can measure up to 75mA natively and up to 800mA with the add-on module. As an added flexibility, the same physical connection for EnergyTrace also features one UART port and four GPIOs for total hardware control.

The XDS110 is designed to replace the aging XDS100 family of JTAG debuggers with higher JTAG and cJTAG data throughput, added support for ARM Serial Wire debug modes at the same cost.

Following the trend for space reduction on modern TI development boards, the XDS110 features a standard TI 20-pin connector as the primary JTAG connectivity to the target. In addition to that, all variants feature modular target configuration adapters for TI and ARM standard JTAG headers (the offer of adapters varies per model).

IEEE1149.7 or Compact JTAG (cJTAG) is a major improvement over the traditional JTAG, as it supports all its features while using only two pins, and is available in selected TI wireless connectivity microcontrollers.

The Texas Instruments XDS110 is a new class of debug probe (emulator) for TI embedded processors. The XDS110 replaces the XDS100 family while supporting a wider variety of standards (IEEE1149.1, IEEE1149.7, SWD) in a single pod. Also, all XDS debug probes support Core and System Trace in all ARM and DSP processors that feature an Embedded Trace Buffer (ETB).

The Texas Instruments XDS110 connects to the target board via a TI 20-pin connector (with multiple adapters for TI 14-pin and, ARM 10-pin and ARM 20-pin) and to the host PC via USB2.0 High Speed (480Mbps). It also features two additional connections: the Auxiliary 14-pin port connector that enables EnergyTrace™, a full duplex UART port and four General-Purpose I/Os, and the Expansion 30-pin connector to connect the EnergyTrace™ HDR pod (to be available at a future date).

The XDS110 comes in a package consisting of: