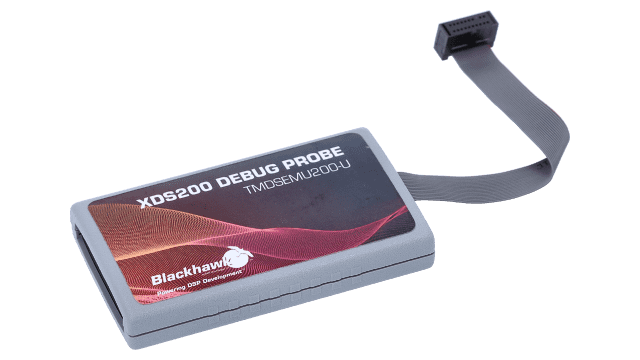 The XDS200 is the mid-range family of JTAG debug probes (emulators) for TI processors. Designed to deliver good performance and the most common features that place it between the low cost XDS110 and the high performance XDS560v2, the XDS200 is the balanced solution to debug TI microcontrollers, processors and wireless devices.

The XDS200 is designed to replace the aging XDS510 family of JTAG debuggers with higher JTAG data throughput, added support for cJTAG (IEEE1149.7) and ARM Serial Wire debug modes at a reduced cost.

Following the trend for space reduction on modern TI development boards, all XDS200 variants feature a standard TI 20-pin connector as the primary JTAG connectivity to the target. In addition to that, all variants also feature modular target configuration adapters for TI and ARM standard JTAG headers (the offer of adapters varies per model).

IEEE1149.7 or Compact JTAG (cJTAG) is a major improvement over the traditional JTAG, as it supports all its features while using only two pins, and is available in selected TI wireless connectivity microcontrollers.

All XDS200 models support a USB2.0 High Speed (480Mbps) connection to the host.  Some models available from 3rd parties also support Ethernet 10/100Mbps and power consumption monitoring on the target board.

The XDS200 is a debug probe (emulator) used for debugging TI embedded devices.  The XDS200 features a balance of low cost with good performance as compared to the low cost XDS110 and the high performance XDS560v2.  It supports a wide variety of standards (IEEE1149.1, IEEE1149.7, SWD) in a single pod. All XDS debug probes support Core and System Trace in all Arm and DSP processors that feature an Embedded Trace Buffer (ETB).  For Core Trace over pins the XDS560v2 PRO TRACE is required.

The XDS200 comes in a package consisting of: