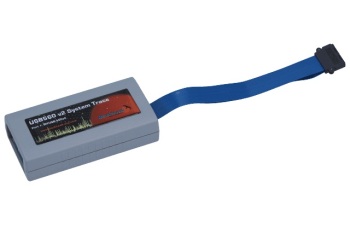 View all additional information for the TMDSEMU560V2STM-U

The XDS560v2 is the first of the XDS560 family of debug probes to provide System Trace (STM) capability, a type of Trace that monitors the entire device by capturing system events such as the state of processing cores, internal buses and peripherals. Most XDS560v2 models feature also System Pin Trace, a mode where the System Trace data is sent to an external memory buffer (128MB) inside the XDS560v2 to allow capturing larger number of system events. The System Pin Trace data connection requires additional wiring to the JTAG connector.

To accommodate for all types of Pin Trace (Instruction and System), all XDS560v2 variants feature a standard 60-pin MIPI HSPT connector as the primary JTAG connectivity to the target. In addition to that, all variants also feature modular target adapters for TI and ARM standard JTAG connectors (the offer of adapters varies per model).

Compact JTAG (cJTAG) is a major improvement over the traditional JTAG, as it supports all its features while using only two pins, and is available in selected TI wireless connectivity microcontrollers.

The Blackhawk XDS560v2 System Trace connects to the target board via a MIPI HSPT 60-pin connector (with multiple adapters for TI 14-pin, TI 20-pin and ARM 20 pin) and to the host PC via USB2.0 High speed (480Mbps). It also requires a license of Code Composer Studio™ IDE to be running on the host PC.

The Blackhawk XDS560v2 System Trace comes in a package consisting of: