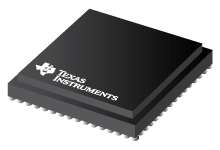 
All trademarks are the property of their respective owners.

The TMS320C64x+™ DSPs (including the TMS320C6457 device) are the highest-performance fixed-point DSP generation in the TMS320C6000™ DSP platform. The C6457 device is based on the third-generation high-performance, advanced VelociTI™ very-long-instruction-word (VLIW) architecture developed by Texas Instruments (TI), making these DSPs an excellent choice for applications including video and telecom infrastructure, imaging/medical, and wireless infrastructure (WI). The C64x+ devices are upward code-compatible from previous devices that are part of the C6000™ DSP platform.

Based on 65-nm process technology and with performance of up to 9600 million instructions per second (MIPS) [or 9600 16-bit MMACs per cycle] at a 1.2-GHz clock rate, the C6457 device offers cost-effective solutions to high-performance DSP programming challenges. The C6457 DSP possesses the operational flexibility of high-speed controllers and the numerical capability of array processors.

The C64x+ DSP core employs eight functional units, two register files, and two data paths. Like the earlier C6000 devices, two of these eight functional units are multipliers or .M units. Each C64x+ .M unit doubles the multiply throughput versus the C64x core by performing four 16-bit × 16-bit multiply-accumulates (MACs) every clock cycle. Thus, eight 16-bit × 16-bit MACs can be executed every cycle on the C64x+ core. At a 1.2-GHz clock rate, this means 9600 16-bit MMACs can occur every second. Moreover, each multiplier on the C64x+ core can compute one 32-bit × 32-bit MAC or four 8-bit × 8-bit MACs every clock cycle.

The C6457 device includes Serial RapidIO®. This high-bandwidth peripheral dramatically improves system performance and reduces system cost for applications that include multiple DSPs on a board, such as video and telecom infrastructures and medical/imaging.

The C6457 device has three high-performance embedded coprocessors [one enhanced Viterbi Decoder Coprocessor (VCP2) and two enhanced Turbo Decoder Coprocessors (TCP2_A and TCP2_B)] that significantly speed up channel-decoding operations on-chip. The VCP2 operating at CPU clock ÷ 3 can decode more than 694 7.95-Kbps adaptive multi-rate (AMR) [K = 9, R = 1/3] voice channels. The VCP2 supports constraint lengths K = 5, 6, 7, 8, and 9, rates R = 3/4, 1/2, 1/3, 1/4, and 1/5, and flexible polynomials, while generating hard decisions or soft decisions. Each TCP2 operating at CPU clock ÷ 3 can decode up to fifty 384-Kbps or eight 2-Mbps turbo encoded channels (assuming 6 iterations). The TCP2 implements the max*log-map algorithm and is designed to support all polynomials and rates required by Third-Generation Partnership Projects (3GPP and 3GPP2), with fully programmable frame length and turbo interleaver. Decoding parameters such as the number of iterations and stopping criteria are also programmable. Communications between the VCP2/TCP2s and the CPU are carried out through the EDMA3 controller.

The C6457 device has a complete set of development tools, which includes: a new C compiler, an assembly optimizer to simplify programming and scheduling, and a Windows® debugger interface for visibility into source code execution.