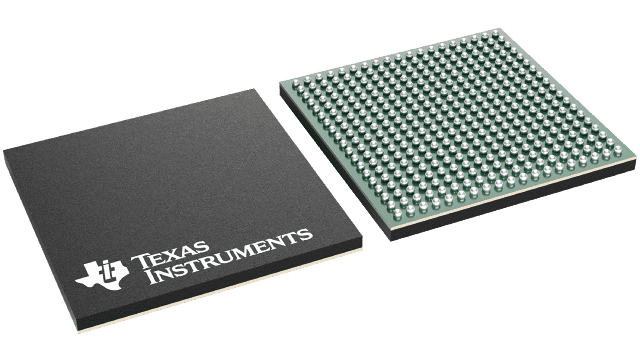 The dual-core architecture of the DM6443 provides benefits of both DSP and Reduced Instruction Set Computer (RISC) technologies, incorporating a high-performance TMS320C64x+™ DSP core and an ARM926EJ-S MPU core.

The ARM926EJ-S is a 32-bit RISC processor core that performs 32-bit or 16-bit instructions and processes 32-bit, 16-bit, or 8-bit data. The core uses pipelining so that all parts of the processor and memory system can operate continuously.

The TMS320C64x+™ DSPs are the highest-performance fixed-point DSP generation in the TMS320C6000™ DSP platform. It is based on an enhanced version of the second-generation high-performance, advanced very-long-instruction-word (VLIW) architecture developed by Texas Instruments (TI), making these DSP cores an excellent choice for digital media applications. The C64x is a code-compatible member of the C6000™ DSP platform. The TMS320C64x+ DSP is an enhancement of the C64x+ DSP with added functionality and an expanded instruction set.

Any reference to the C64x DSP or C64x CPU also applies, unless otherwise noted, to the C64x+ DSP and C64x+ CPU, respectively.

With performance of up to 4752 million instructions per second (MIPS) at a clock rate of 594 MHz, the C64x+ core offers solutions to high-performance DSP programming challenges. The DSP core possesses the operational flexibility of high-speed controllers and the numerical capability of array processors. The C64x+ DSP core processor has 64 general-purpose registers of 32-bit word length and eight highly independent functional units&151;two multipliers for a 32-bit result and six arithmetic logic units (ALUs). The eight functional units include instructions to accelerate the performance in video and imaging applications. The DSP core can produce four 16-bit multiply-accumulates (MACs) per cycle for a total of 2376 million MACs per second (MMACS), or eight 8-bit MACs per cycle for a total of 4752 MMACS. For more details on the C64x+ DSP, see the TMS320C64x/C64x+ DSP CPU and Instruction Set Reference Guide (literature number SPRU732).

The DM6443 also has application-specific hardware logic, on-chip memory, and additional on-chip peripherals similar to the other C6000 DSP platform devices. The DM6443 core uses a two-level cache-based architecture. The Level 1 program cache (L1P) is a 256K-bit direct mapped cache and the Level 1 data cache (L1D) is a 640K-bit 2-way set-associative cache. The Level 2 memory/cache (L2) consists of an 512K-bit memory space that is shared between program and data space. L2 memory can be configured as mapped memory, cache, or combinations of the two.

The Resizer accepts image data for separate horizontal and vertical resizing from 1/4x to 4x in increments of 256/N, where N is between 64 and 1024.

The Video Processing Back-End (VPBE) is comprised of an On-Screen Display Engine (OSD) and a Video Encoder (VENC). The OSD engine is capable of handling 2 separate video windows and 2 separate OSD windows. Other configurations include 2 video windows, 1 OSD window, and 1 attribute window allowing up to 8 levels of alpha blending. The VENC provides four analog DACs that run at 54 MHz, providing a means for composite NTSC/PAL video, S-Video, and/or Component video output. The VENC also provides up to 24 bits of digital output to interface to RGB888 devices. The digital output is capable of 8/16-bit BT.656 output and/or CCIR.601 with separate horizontal and vertical syncs.

The Ethernet Media Access Controller (EMAC) provides an efficient interface between the DM644X MPU core processor and the network. The DM6443 EMAC support both 10Base-T and 100Base-TX, or 10 Mbits/second (Mbps) and 100 Mbps in either half- or full-duplex mode, with hardware flow control and quality of service (QOS) support.

The Management Data Input/Output (MDIO) module continuously polls all 32 MDIO addresses in order to enumerate all PHY devices in the system. Once a PHY candidate has been selected by the MPU, the DIO module transparently monitors its link state by reading the PHY status register. Link change events are stored in the MDIO module and can optionally interrupt the MPU, allowing the MPU to poll the link status of the device without continuously performing costly MDIO accesses.

The rich peripheral set provides the ability to control external peripheral devices and communicate with external processors. For details on each of the peripherals, see the related sections later in this document and the associated peripheral reference guides.

The DM6443 has a complete set of development tools for both the ARM and DSP. These include C compilers, a DSP assembly optimizer to simplify programming and scheduling, and a Windows™ debugger interface for visibility into source code