TLV9051
ACTIVE
This product has been released to the market and is available for purchase. For some products, newer alternatives may be available.
Single 5-MHz, 15-V/µs high slew-rate, RRIO op amp 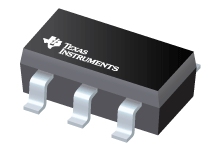