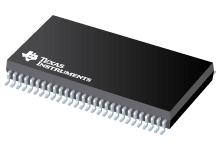 The output-enable input does not affect the internal operation of the latches. Old data can be retained or new data can be entered while the outputs are in the high-impedance state.